Hello! I hope you had a wonderful Memorial Day weekend! Mine was really great. If you are following me on social media- (@lunalyssa) – you definitely know what I am talking about! From waterfalls, to lots of different food, to roller coasters- it was a memorable one. Yes- you will know everything and everywhere I went by the end of this post! I apologize for the wait- next time I will work to make the post the same or following day. But for now- let’s get to it.

On Saturday morning Cecilio and I took our first road trip together! We had a bit of a late start- regardless, we still saw so much and had tons of fun. After a 5-hour drive outside of Long Island (4 hours from NYC itself), past several state parks, lakes, fishing/kayaking spots, a ton of roadkill 😦 , and towns with funny names- you will arrive at Watkins Glenn.

Watkins Glenn is a SMALL town in Schuyler County, New York. According to an online census, only 1,980 people reside there!!!!! (!!!!What!!!!) As we drove around, it seemed like a really cute, quaint town that we would have had fun exploring- but because we did get there in the late afternoon- we didn’t want to miss out on the national park before it closed.

First though- ice cream! There is always time for ice cream. Near the entrance of Watkins Glen is an icecream parlour called The Great Escape. The first thing I realized was that this place had home made VEGAN icecream- yum! The inside decor is vintage with black and white tile floors, and old arcade games. As I mentioned, they sell homemade ice cream (so many flavors and vegan options), root beer floats, and gelato. Compared to ice cream shops in NYC- the prices here were really good. After trying tons of flavors, I chose the vegan Lavender Blueberry icecream on a waffle cone. It was amazing! Cecilio got a root beer float with soft serve vanilla ice cream. Everything was really great, and we were super happy we decided to make that stop before our hike at the beautiful Watkins Glen State Park. 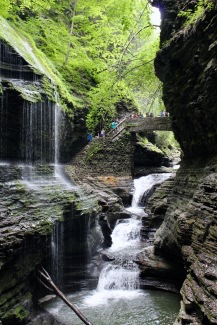 “Sparkling lakes, breathtaking waterfalls and rolling pastoral land dominate the landscape of the Finger Lakes Region. Over thousands of years, gigantic glaciers and coursing streams have carved this landscape. The most recent glacier moved through shallow river valleys leaving in its place deep, steep-sided troughs. When the glaciers receded north 10,000 years ago, water filled these new troughs, creating the 11 Finger Lakes. Since that time water has flowed down glacially steepened hillsides carrying debris that cut away at soft sedimentary rock to form our beautiful and unique gorges.”

YOU must go here. In this breath-taking state park, which is the most famous of the Finger Lakes, there are over 800 man-made steps in this park which give you close up access to 19 different wateralls. It is a lot of climbing up stairs – you WILL get out of breath. Luckily though there are a lot of spots to stop, sit and admire the beauty while you catch your breath. When you hike to the top, there is a shuttle bus which is $5 dollars a person to bring you back down if you’re too tired. I think this hike is best for people who are little older personally, but a lot of people had their kids. Actually- tons of people from newborns to teens. There were kids everywhere. So, if you’re reading and have kids- you can go with them! 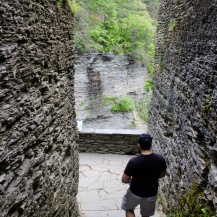 Attire is so important, guys… Comfortable shoes and clothing are a MUST. We saw so many girls wearing dresses, and guys with designer sneakers. We felt reaaaaally bad for these people, haha. You will get wet and you will ruin your shoes a bit. Keep this in mind if you visit! Wear something that you can breathe in, and shoes that you don’t mind ruining. There is a lot of mud and dirty water on the rocks! Cecilio’s running shoes got pretty dirty but it was okay because we purposely bought shoes we didn’t really care about. I wore my Tevas Sandals which were perfect. I was comfortable and my feet didn’t hurt the entire hike. The mud got on my feet at times but I would just put my feet in the water, and I was brand new again. 🙂 We both wore shorts with a tanktop/t-shirt which we both agree was a really smart choice later on.

Swimming isnt allowed here, however there were some areas that you could step down into the water- it is extremely slippery though, so do this at your own risk (if you decide to be a rebel like me. ;p) Please be careful though… I had appropriate shoes on, saw that the water wasn’t that rough, and also saw several people with their feet in the water, so I decided it’d be safe for me to go in, too. 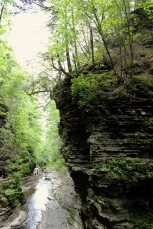 Besides the waterfalls, and hiking- this is a BEAUTIFUL place to spend time doing other things, too. In the park, there are also picnic tables, grills, a swimming pool, a lake for fishing, and a playground, as well. According to the website, household pets are allowed in the park, too, however they can’t go on the Gorge Trail, or in the swimming pool area. We didn’t see any wildlife beside A TON of chipmunks, though we did read online that there are bobcats, and fox in the woods, too.

The 9/10 rating is simply because it was SO CROWDED. There really were tons and tons of people. It kinda cut into photo ops- but regardless, the views were outstanding and I wish that I could go back. I 100% reccomend that everyone sees this park at least once in their life!

My road trip didn’t end there, though. That night after Watkins Glenn, Cecilio and I drove to Rochester. On the drive we stopped at a yard sale, and ooo’d and ahh’d at the scenery as we drove. The drive itself was gorgeous. We saw so many farms, and grass lands that went on FOR DAAAYS. Once we got to Rochester- you know ya girl had to get a GARBAGE PLATE. Hello! If you’re not from Rochester or have never been there- let me explain.

A garbage plate is basically a plate of all BBQ-type foods- but somehow better when they do it. It’s two cheeseburgers, home fries, macaroni salad and ketchup all together. It may sound gross to some. It’s not. It sounds unhealthy. It is. Hahah! But it’s so worth it! And if you can only get it when you go to Rochester then why the heck not right? (Scott really wanted a shout-out for driving us there when we really, really wanted it so here it is- you the bomb, Scott. Clean your car.)

I accidentally didn’t save the photo of my garbage plate (tear tear) BUT this saved photo from my Snapchat shows you how excited I was. And look at the garbage plate geo-tag! Ha!

In Rochester we also visited Darien Lake amusement park which was about 55 minutes outside of Rochester in Darien, NY. It was a really nice amusement park. I really liked that admission covers BOTH the water park, and the amusement park. The price for the park is also really cheap in comparison to Six Flags. We bought our tickets online for $37.00 because at the gate it is $50.00 to purchase a ticket! Definitely worth buying the ticket online. You don’t need to do it in advance or anything like that- I bought mine in the parking lot. The park was also really empty- I’m not sure if it was because it was Sunday, or if the location just isn’t THAT popular but if we wanted to, we could have rode the same roller coaster five times in a row with a less than 5 minute wait. It isn’t a small park either. The water park, and the amusement park are together in one area so there are tons of rides to get on. I’m really glad I came here! Thanks to my cousin Sam for thinking of the idea. 😉 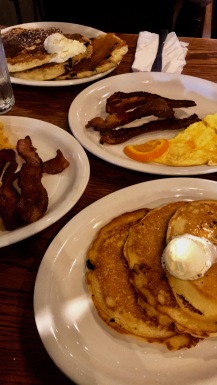 On Monday, my trip came to an end. It was long and tiring at times but I am really glad I did it. It was Cecilio and I’s first road trip together, and it ended up being a really big success. And OBVIOUSLY I made us stop for Cracker Barrel on the way home because…… it’s Cracker Barrel. And if you don’t know what Cracker Barrel is….. just google map it, and go. Now. Seriously. You’re missing out. Haha! That’s all for today you guys. I really truly hope that you enjoyed this post, and got some cool information out of it. That’s really all I could ever ask for.

Thank YOU for reading and supporting me. See you again soon with a new post full of new adventures.

Welcome to my blog!

As a millennial situated in NY- in the time of crippling student debt, pressure to conform to the norms of society, being educated as hell, but still broke AF- I am here to help YOU, my fellow millennial, to ENJOY your life. I am just like you. I will offer you so many fun things to do on a budget – because our lives shouldn’t be a struggle to enjoy. Click here to learn more about me! I hope you enjoy my posts!